A lot of people are confused about what to do when confronted with an episode of low back pain. Unfortunately, that confusion also extends into the healthcare system, such that some patients don’t get effective, evidence-based back pain treatment.

The recommended guidelines for evidence based back pain treatment:

So a study in 2010 published in The Spine Journal analyzed the treatment of 92 patients with new onset low back pain. Half of the patients were treated via “usual care” at a major hospital system and failed to receive treatment consistent with evidence-based guidelines. (see table below) 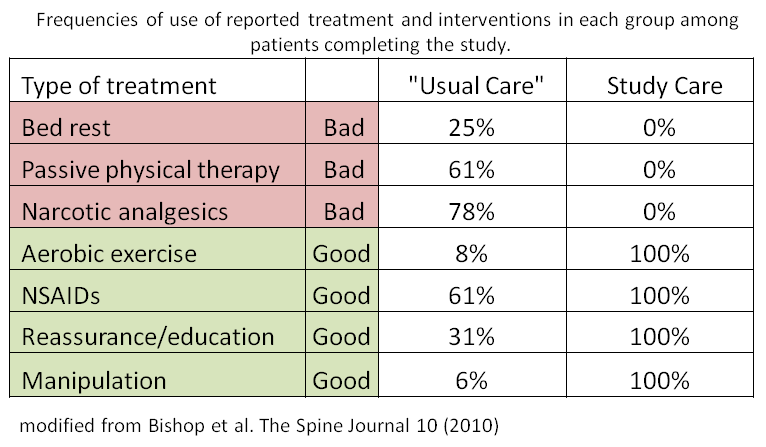 The other half of the patient group received evidence-based treatment including exercise, anti-inflammatory medication (NSAIDs), reassurance, and manipulation.  Compared to the “usual care” group, those receiving the evidence-based treatment including chiropractic spinal manipulation therapy had significantly greater improvement in low back function 8, 16, and 24 weeks later.

Commenting on the study, the journal editors wrote, “This study offers some insight into high rates of opioid in passive methods for acute low back pain employed in “usual care” at a university-based hospital. The results of avoiding some well-documented treatment pitfalls and using the evidence-based guideline method appear promising. The study also provides evidence that the actual implementation of guideline recommendations may be truly beneficial to patients, themselves, and not just to payers’ strategy to minimize costs.”