Back pain has many different causes, from spine fractures to kidney infections, but most back pain is mechanical.  The mechanical workings of the spine and surrounding support structure have failed to protect itself with normal use, causing the joints to become swollen and inflamed.

Mechanical pain syndromes are usually caused by a functional movement disorder.  It is functional, because the problem is aberrant control of an otherwise healthy system.  If someone has an altered walking gait because of Parkinson’s Disease, it is a movement
disorder. On the other hand, if someone has altered walking gait because of tight hips from sitting at work for 2,080 hours per year, it is a functional movement disorder.

For example, mechanical back pain is commonly associated with restricted hip motion.  Modern life involves hours of sitting, which shortens the muscles responsible for flexing the hip (pulling the knee up).  Short hip flexing muscles don’t allow for the opposite action, hip extension, yet hip extension is the power motion of standing up, walking, running, and jumping.  The large gluteus maximus muscles are designed to extend the hip and push us forward.  Yet the body is adaptive. If we cannot extend at the hip, we subconsciously extend at the back—arching the low back to push us forward to walk.  Arching the back with every step can be a subconscious movement for a long time, until the pain of inflamed spine joints becomes noticeable or even disabling.  The pain is often worse after walking, running, or prolonged standing. 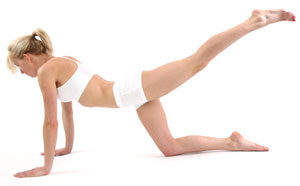 Even while attempting to exercise the gluteus maximus with hip extension, this person is extending at the low back because of the faulty pattern of movement.