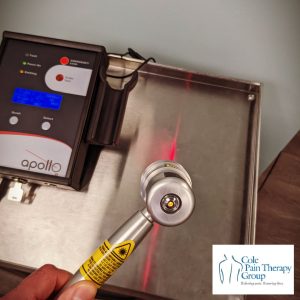 Laser actually is an acronym for Light Amplification by Stimulated Emission of Radiation. Low level laser therapy (LLLT) is a fairly new and popular way physicians are treating musculoskeletal conditions. Cold laser or Low Level Laser Therapy (LLLT) directs very specific light waves into your body to stimulate healing. Cold laser is very different from other medical laser applications that involve burning or cutting with a laser device. Instead soothing, therapeutic laser waves penetrate the skin and are absorbed by muscle and tendon cells. In turn, these cells then convert this light energy into chemical energy to accelerate connective tissue repair and promote anti-inflammatory agents for healing. This has been compared to how plants use light energy for photosynthesis. Laser therapy has also shown benefits in reducing inflammation, pain, and accelerated tissue regeneration.

What to expect during cold laser treatment

The light waves are projected from a small, handheld device that is contacting the skin or hovering slightly above the area of complaint.  This is a completely painless treatment, rather like a warm flashlight shining on your skin.  The only thing that you may feel is the metal and glass device touching your skin.  Treatment sessions vary, but it is typically a short interval around 1-2 minutes.  The chiropractic assistant may give you  protective glasses.  The specialized glasses shield your eyes from any reflected laser exposure.  There are no adverse side effects and no recovery time, so you’ll be safe to get back to your daily life right away.

So what is low level laser therapy (LLLT) and how does it work?

Laser actually is an acronym for Light Amplification by Stimulated Emission of Radiation. LLLT is a low intensity therapy that uses the photochemical effects of light, known as photobiomodulation, to accelerate connective tissue repair and promote local anti-inflammatory changes. This accelerate healing and reduces pain. Low level laser therapy began in 1967 when Dr. Endre Mester began testing the biological effects of laser therapy. In his studies, he noticed accelerated wound healing and accelerated hair growth.

Laser therapy and its effects at the cellular level have been studied rigorously. Researches found that photo-stimulation of cellular mitochondria enhances healing via an increase of fibroblasts, keratinocytes, endothelial cells, and lymphocytes [3,4]. This enhanced healing effect also may involve development of new blood vessels and collagen.

The International Association for the Study of Pain defines pain as an “unpleasant sensory or emotional experience associated with actual or potential tissue damage, or described in terms of such damage” [1]. Pain is considered to be the most common reason for physician visits and missed work or school days. In fact, one out of every three Americans will deal with chronic pain annually [2]. Low level laser therapy is a cost-effective and safe technique for treating a variety of pain causes.

Cold laser therapy has positive effects on the mechanism of both pain and inflammation. LLLT causes an inhibition of action potentials leading to a cascade effect that suppresses the synaptic activity in second order neurons, in turn, suppressing the pain matrix in the brain. While that threshold is lowered, pro-inflammatory neuropeptides release is downregulated. It is also believed that LLLT has effects on the neurotransmitters that aid in pain relief. Serotonin and endorphin levels have been shown to increase with LLLT [5]. In the medium term, laser therapy has shown to reduce edema (swelling) and inflammation.

To conclude, low level laser therapy is a pain-free, therapeutic modality that can be beneficial for pain relief and the promotion of healing. LLLT accelerates the body’s ability to heal itself through multiple mechanisms like reducing inflammation, inducing pain chemicals, and accelerated cellular regeneration.

Font Resize
Contrast
Accessibility by WAH
Call Us Text Us