John Doe scheduled an evaluation at Cole Pain Therapy Group for evaluation of low back pain.  He had been having several episodes of back pain per year for the past 4-5 years. Each episode lasted a day or so.  He would use an ice pack and some stretching exercises that were helpful. These episodes would usually occur after starting an exercise program, so he was getting tired of slowly gaining weight and not being able exercise like he used to.

He didn’t really have time to worry about his back between working and coaching his kids’ basketball team. He was able to manage the pain episodes, yet seemed to be conceding more and more of his life with each flare-up.

This changed 5 days ago.  After several hours of moving Christmas boxes around his attic, his back began to hurt. Two hours later, he could hardly move because of the pain. This had never happened before.  His wife drove him to the emergency room, where he received x-rays of his low back and a shot, to ease his pain.  The ER doctor explained that there was nothing serious, only bone spurs on his spine. 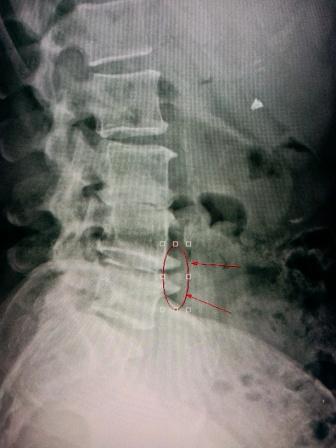 Decreased disc space, degeneration of cartilage, and formation of bone spurs are part of the normal spine aging process. Unless the process results in instability (joints too loose) or nerve irritation, it should not be considered a cause of back pain.

By the time he was talking with me, his back was already feeling about 50% better, but he was concerned about 1) not being able to exercise without irritating his back, and 2) what the bone spurs meant for his back in the future.

Here’s an example of a back without bone spurs. From the picture alone, there is no way to tell it the back is painful or working well.

Chiropractic examination with orthopedic and neurological tests confirmed that the lumbar facet joints were painful and swollen.  This was causing his localized low back pain.  He did not have any evidence of nerve damage (pinched nerve). I reviewed his ER x-rays and found that he did have bone spurs consistent with the normal aging process of spines. The bone spurs (degenerative disc disease) are there every day, regardless of how good or bad his back feels.

Further examination found that despite being strong, the core abdominal muscles were not working in a coordinated way.  This functional stability problem was resulting in his low back facet joints being irritated and ultimately painful with exercise.