Whiplash is a generic term applied to injuries of the neck caused when the neck is suddenly and/or violently jolted in one direction and then another, creating a whip-like movement. Whiplash is most commonly seen in people involved in motor vehicle accidents, but it can also occur from falls, sports injuries, work injuries, and other incidents.

What structures are injured in a whiplash? 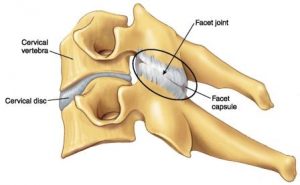 Whiplash injuries most often result in sprain-strain of the neck. The ligaments that help support, protect, and restrict excessive movement of the vertebrae are torn, which is called a sprain. The joints in the back of the spine, called the facet joints, are covered by ligaments called facet capsules, which seem to be particularly susceptible to whiplash injury.

In addition, the muscles and tendons are strained—stretched beyond their normal limits. The discs between the vertebrae, which are essentially ligaments, can be torn, potentially causing a disc herniation. The nerve roots between the vertebrae may also be stretched and become inflamed. Even though it is very rare, vertebrae can be fractured and/or dislocated in a whiplash injury.

What are the common signs and symptoms of whiplash?

The most common symptoms of whiplash are pain and stiffness in the neck. These symptoms are generally found in the areas that are “whiplashed.” For example, during a whiplash, first the head is lifted up from the upper-cervical spine. This creates a sprain/strain in the region just below the skull, where symptoms usually occur. Symptoms may also commonly be seen in the front and back of the neck. Turning the head often makes the pain and discomfort worse.

Headache, especially at the base of the skull, is also a common symptom, seen in more than two thirds of patients. These headaches may be one-sided (unilateral) or experienced on both sides (bilateral). In addition, the pain and stiffness may extend down into the shoulders and arms, upper back, and even the upper chest.

In addition to the musculoskeletal symptoms, some patients also experience dizziness, difficulty swallowing, nausea, and even blurred vision after a whiplash injury. While these symptoms are disconcerting, in most cases, they disappear within a relatively short time. If they persist, it is very important to inform your doctor that they are not resolving. Vertigo (the sensation of the room spinning) and ringing in the ears may also be present. In addition, some patients may feel pain in the jaw. Others will even complain of irritability, fatigue, and difficulty concentrating. These symptoms also resolve quickly in most cases. In rare cases, symptoms can persist for weeks, months, or even years.

Another important and interesting aspect of whiplash is that the signs and symptoms often do not develop until 2 to 48 hours after the injury. This scenario is relatively common but not completely understood. Some speculate that it may be due to delayed muscle soreness, a condition seen in other types of injury.